Our response to Food Scarcity in

Guatemala due to COVID-19 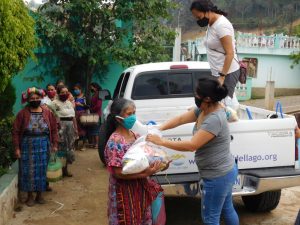 Niños del Lago (NdL) realized that the worldwide pandemic of COVID-19 would mean that we could not go ahead with the planned annual camps due in Oct/Nov 2020.

It quickly became very evident that due to the lockdown of Guatemala the most vulnerable children and their families were going to have difficulty accessing food. We wished to do something to help our neighbors and local communities. The decision was taken to use the funds we already had to go towards supplying basic food provisions to as many families as we could through a FOOD-AID PROGRAM. The Guatemalan government was very quick to lockdown the country with no public transportation, a curfew from 4pm-4am at first and then adjusted to 5pm-5am, no movement between departments and even towns and villages, and many markets closed, along with businesses being shut. (The curfew was later shortened a couple of times and then finally cancelled at the end of Sept.)

The knock-on effect of the curfew left many families with no, or little, work and no way of getting to markets and stores to purchase food and provisions, nor sell them. This means they are going hungry. 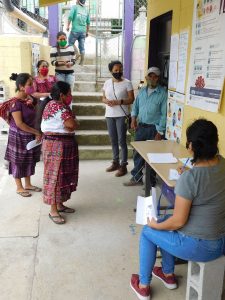 There are families with as many as 10 adults that have all lost their jobs. The need is great. More and more we seeing white flags appear in front of households; this indicates that the family inside is going hungry. In the Highlands of Guatemala, the majority of people work in the informal sector, living literally hand-to-mouth, so no work and no money today, means no food today!

And for those growing and selling fresh produce, many are unable to get to the markets to sell.

The current funds that NdL had for 2020 would enable a PHASE I, with a distribution of 200 packages a month during April, May, & June, so a total of 600 packages.

While the above products were being source – no easy matter with prices rising daily, and bulk buying of some products only possible in the town of Sololá – the NdL team started investigating which communities and families would receive these packages. 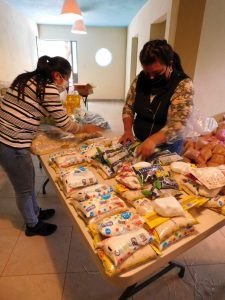 First the team approached the Mayor and Municipalidad (Muni – Local Government) of San Andrés Semetabaj. This is the town closest to the Camp, just above it. The Mayor then helped connect the team with the local COCODES (groups of neighbours) of areas (mostly know as Aldeas), which they knew had vulnerable families and households.

These COCODES then produced a list for NdL to be able to ‘interview’ these families. The questions were very simple, with the main objective was to find the following: single mothers, elderly people especially those looking after grandchildren with no family support, and those families with handicapped members.

Almost an impossible task, as there were many more families in need that NdL can help. A short-list was then chosen of between 10-20 in 18 different aldeas. An extra 19th one, San Luis, was added at the last minute.

With the funds we already had and the help of an amazing group of 8 volunteers, we managed to purchase food for 600 Food-Aid packages and pack them up. 203 of which were distributed at the beginning of May (it was not possible to do the delivery at the end of April as planned). 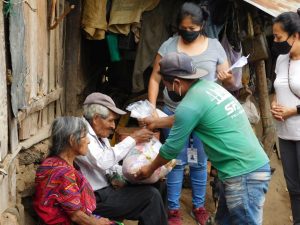 The first delivery was a great success with huge thanks from all the communities around San Andrés Semetabaj to which there was a distribution. The logistics were hugely helped by the Municipalidad of San Andres’s social worker, Noemi Ruth Xingo who accompanied the team to help direct them to the various communities. A total of 782 family members were helped.

A second delivery happened in late May. This time NdL was working with the Bomberos of Pana and another NGO called Salomon’s Porch, based in Pana. So, as well as reaching rural areas around San Andrés, families in Pana were also helped. This time 202 families benefitted with 808 family members. The third delivery was in June and returned to rural areas around San Andrés, as well as some in Pana and the last 15 packages were given to an orphanage with 21 children, not far from Patzún – enough for nearly a month for the staff as well as the children. This orphanage has been very badly hit as its budget has been drastically reduced due to the epidemic. A total of 195 packages were distributed this time with 811 people benefitting.

In collaboration with other NGO organizations we were able to return to the orphanage with further food, clothing, cleaning products, linens and even a birthday cake or two!

We wish to thank the generous collaboration from the following organizations: Salomon’s Porch, Worthy Village, Fundamaya, and Guatesup. We would also like to thank Ana Gonzales Suar, Elena Pérez Can, Eliza Camajá, Sam Joj Can (who generously donated many of his toys!), and JoAna Dwyer.

During June we did a fundraising campaign to enable NdL to complete the three months of PHASE II (July, Aug, & Sept).

The response was overwhelming, and we are so grateful to all those who donated – THANK YOU! The money raised enable us to provide four month’s worth of food, that is 200 food packages a month, so the whole of PHASE II along with October, the first month of PHASE III: a total of 800 food packages!

Again, thanks to a wonderful team of volunteers, this time joined by our new Guatemalan Board Member, Silvia de Purswell, a friend of theirs, and her son Tommy, a further 600 packages were put together ready for the three months of PHASE II.

This started off at the end of July, when a total of 196 families and 814 family members benefitted. Many of the communities visited in PHASE I, were visited again, but this time to different family groups. 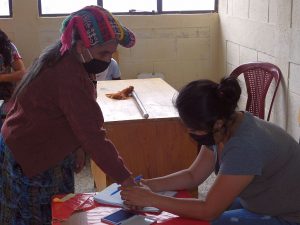 The second delivery went even further afield to Cerro del Oro on the other side of the Lake, beyond San Lucas Tolíman along with San Jorge up above Pana, and Santa Catarina Palopó, along with some in Pana again too. This time 202 families received packages benefitting a total of 853 people. For the third delivery, the decision was taken to help the men, women, and children who dig in the riverbed of the Panajachel, Río San Francisco, collecting sand and rocks.

And, as sadly the number of positive cases in Pana had increased dramatically through the month of September, NdL decided to help those in quarantine. Whole families are quarantined and the even the Bomberos (Firemen/Emergency Services), who usually help these families, were unable to help, as they themselves are in quarantine and the Fire Station itself had to close for a few days! 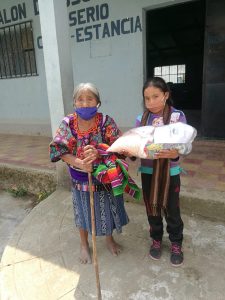 Therefore, NdL, with the help of the Centro de Salud (Health Center), delivered packages to 75 quarantined families. NdL is very grateful for the coordination of the Doctor in Charge of the Centro de Salud, Alejandra Churunel. And then a few other rural San Andres communities were reached as well. A total of 202 families benefitted.

NdL is lucky enough to have funds to provide 200 Food-Aid Packages for the month of October. However, we dont have enough for November and December. So…

WE NEED YOUR HELP AGAIN!

TO BENEFIT ANOTHER 600 FAMILIES!

Before the end of October! 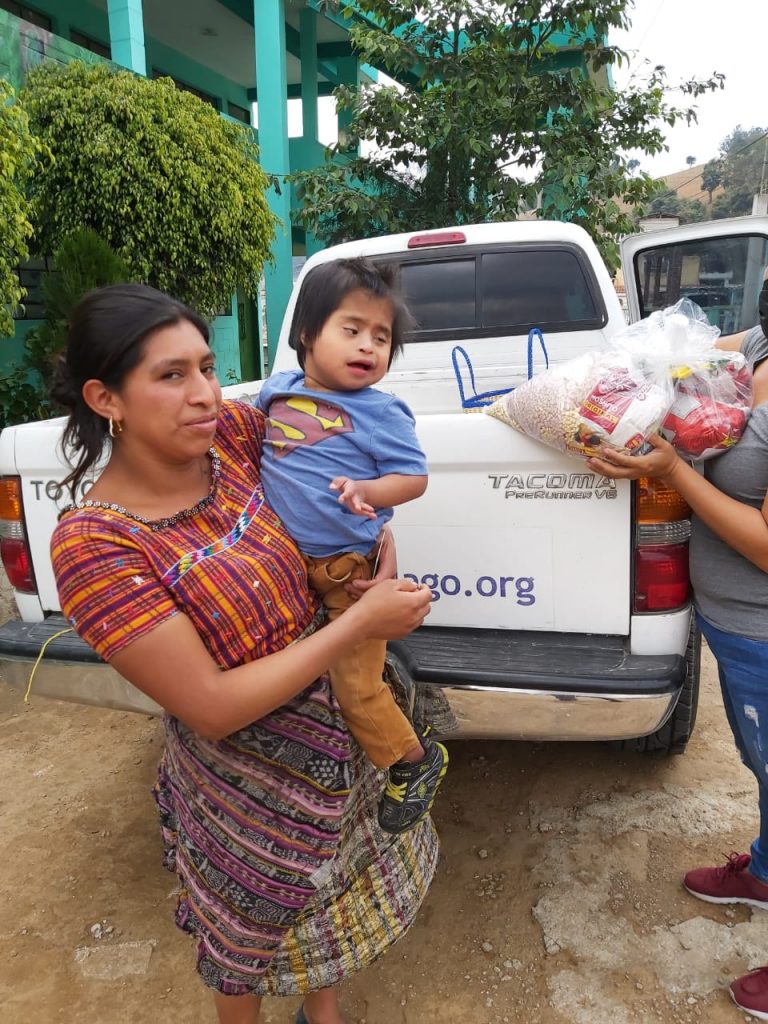